Using a technique called confocal microscopy, a team of scientists from Germany and the Netherlands found that elliptical colloidal suspensions form an unexpected state of matter, liquid glass, in which individual particles are able to move but are unable to rotate.

“Colloidal particle suspensions are widespread in nature and technology and have been extensively studied over more than a century,” said senior co-author Professor Andreas Zombosch of the Department of Chemistry at the University of Konstanz and colleagues.

“When these suspensions are densified to large chunks, their structural dynamics are often halted in an unordered vitreous state before they can form an organized structure.”

“To date, most experiments have been conducted with spherical colloids. However, recent interest in synthetic colloids as physical building blocks has led to the development of many new technologies for synthesizing colloidal particles with specific geometric shapes and interactions.”

In their experiments, Professor Zumbusch and the co-authors focused on elliptic colloids of polymethylmethacrylate.

Professor Zombosch explained: “Due to their distinct shapes, particles have a direction, unlike spherical particles, which leads to the emergence of completely new and previously unexamined types of complex behaviors.”

Using confocal laser scanning microscopy, the researchers recorded the temporal evolution of the 3D positions and orientations of more than 6,000 ellipticals.

“What we called the liquid glass is the result of these groups hindering each other and mediating the distinctive long-term spatial relationships.”

“These prevent the formation of liquid crystals that would be the globally ordered state of matter expected from thermodynamics.” 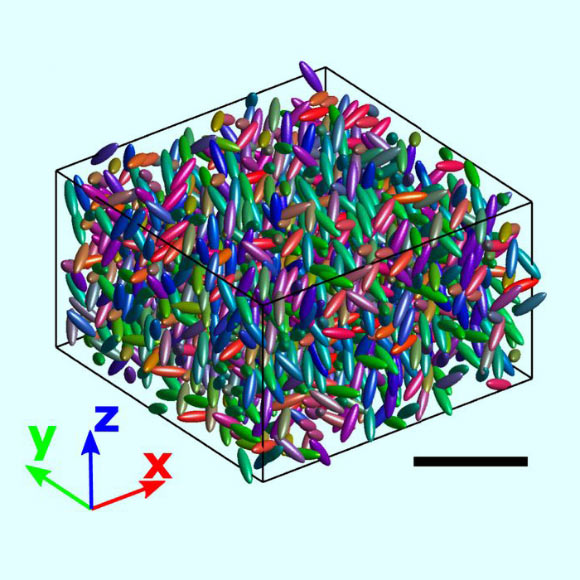 The team observed two glass shifts – a regular phase shift and an unbalanced phase shift – interacting with each other.

“This is incredibly interesting from a theoretical point of view,” said Professor Matthias Fox, a researcher in the Department of Physics at the University of Constance.

“Our experiments provide the kind of evidence for the interaction between critical fluctuations and the glass stop that the scientific community has been pursuing for some time.”

“The expectation of liquid glass has been a theoretical guess for twenty years.”

“The results also indicate that similar dynamics may operate in other glass-forming systems, and thus may help illuminate the behavior of complex systems and molecules ranging from very small (biological) to very large (cosmic).”

“It is also likely to affect the development of liquid crystal devices.”

The discovery was reported in a sheet Posted in Proceedings of the National Academy of Sciences.