NASA has detected a refraction in a spiral arm of the Milky Way spanning 3,000 light-years

NASA has found a «fracture» in one of the spiral arms of the Milky Way that could give new details about the galaxy’s past.

The discovery, which looks like a ‘sliver sticking out of a wooden plank’, according to NASA, stretches 3,000 light-years across from one of the galaxy’s arms and includes stars and a group of four nebulae.

It’s the first major structure identified that is located quite differently from the opposite arms and is an important finding, given that researchers still don’t know the full structure of the galaxy itself, since the Earth is inside it. 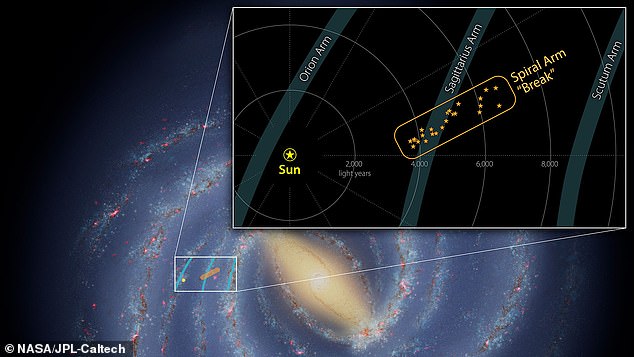 NASA said the discovery resembled «a sliver emerging from a plank of wood». The structure stretches 3,000 light-years across and includes stars and four nebulae

«It’s like standing in the middle of Times Square and trying to draw a map of Manhattan,» NASA wrote in a message. statment.

Experts were able to find the feature using NASA’s Spitzer Space Telescope — before it was retired in January 2020 — along with data from the European Space Agency’s Gaia mission to measure the exact distance of stars in the arm.

according to who — whichThe Gaia spacecraft, launched in 2013, was designed to create a 3D map of the Milky Way with «unprecedented measurements of positional and radial velocity.»

After looking at the data, the scientists were able to determine that the «broken» structure was moving at roughly the same speed and direction in space as the arm itself, known as the arc arm.

The study’s lead author, Michael Cohen, an astrophysicist at the California Institute of Technology, said in a statement statment. 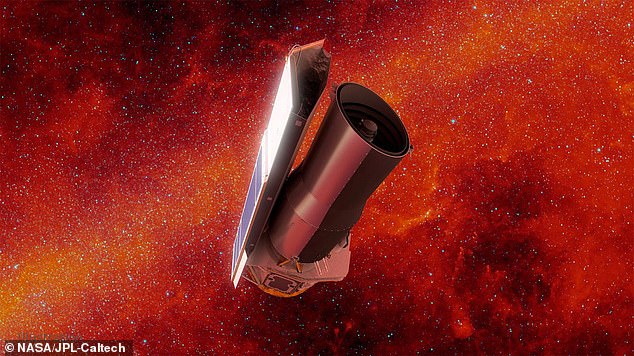 Most models of the Milky Way suggest that the arc arm forms a spiral with an inclination angle of about 12 degrees, but the structure we examined really stands out at about 60 degrees.

However, the new observations indicate that the structure «really protrudes at about a 60-degree angle,» Kuhn added.

«When we put the Gaia and Spitzer data together and we finally see this detailed 3D map, we can see that there is a great deal of complexity in this region that wasn’t evident before.»

Nebulae are interstellar clouds of gas, dust, and hydrogen in space.

It remains unclear why the hull and arm angles are so different.

Scientists aren’t yet sure how and why arms form on galaxies — in this case, spiral arms — but the discovery may shed light on that.

«Ultimately, this is a reminder that there are many uncertainties about the large-scale structure of the Milky Way, and we need to look at the details if we are to understand the bigger picture,» said one of the study’s co-authors.

This structure is a small part of the Milky Way, but it can tell us something important about the galaxy as a whole.

The study was published in July in the scientific journal Astronomy and astrophysics.