New forest growth may have caused a mass extinction 360 million years ago by fueling the proliferation of massive plankton that absorbed all the oxygen from the oceans — and experts say this is now happening at a faster rate.

Written by Stacy Liberator for Dailymail.com

The Devonian mass extinction wiped out 70 percent of life on our planet about 360 million years ago, but what caused this deadly event has remained a mystery — until now.

Animals, mostly marine species, are a result of the Earth’s oceans depleting oxygen, and previous work indicates a volcanic eruption or even a supernova, but a new study finds that new forests have grown in the ancient world.

An international team of scientists has uncovered evidence that fresh plants released nutrients into the seas that feed the blossoms of megafauna, which have gobbled up all the oxygen and choked off anything and everything that lives in salt water.

Separate surveys show hundreds of «dead zones» around the world today where life cannot survive for the same reason that led to the Devonian extinction, and experts say it is «happening at a much faster rate than it was during the Late Devonian Period.»

The Devonian mass extinction wiped out 70 percent of life on our planet around 360 million years ago, but the cause of this deadly event remains a mystery. But a study suggests that new growth of forests around the world sparked the deadly event

The mass extinction is one of Earth’s five largest extinctions and has been previously blamed for asteroid impacts, climate change, sea level changes and widespread volcanic activity.

Alternatively, volcanic eruptions may have altered the chemistry of terrestrial environments (for example, soil composting) that could contribute to eutrophication and hypoxia through Earth’s orbital inputs.

However, the team said Within the sciences This volcanic activity may have amplified the extinctions that lasted for about 20 million years. 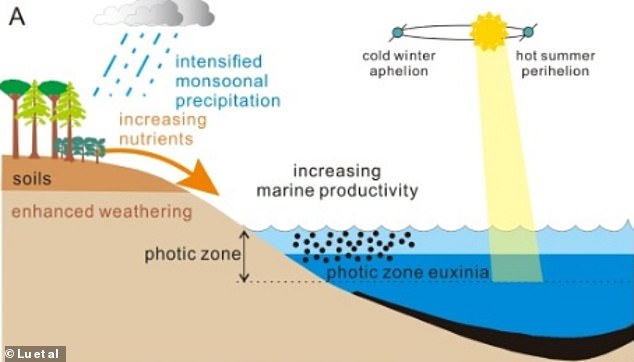 An international team of scientists has uncovered evidence that fresh plants released nutrients into the seas that nourish the massive algae blooms, which have gobbled up all the oxygen and choked off anything and everything that lives in the saltwater. 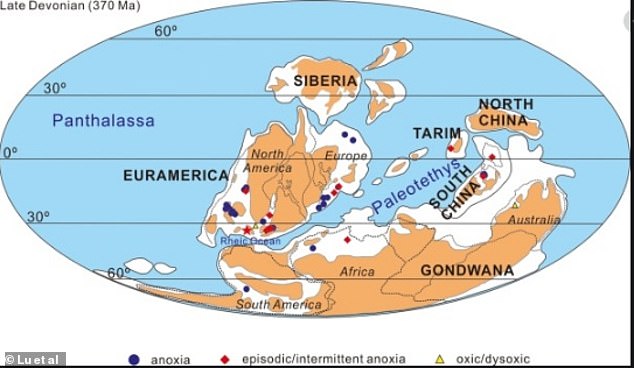 This study investigated the upper Devonian rock from Chattanooga, Tennessee, where they found evidence that new forests over the time period were to blame.

This is a geological formation that stretches across Alabama, Arkansas, Kentucky, Missouri and Tennessee, and is home to a collection of fossils that date back to the Devonian period.

Approximately 65 samples were collected from the site and brought to the laboratory to measure the concentrations of particles known to be associated with oxygen levels in the seas, plankton reproduction, plant material, soil and sediment erosion.

The fluctuation of these chemical fingerprints, or «agents,» led to the team’s answer.

They were able to see a correlation when large amounts of nutrients flow into the oceans and when plankton activity increases. 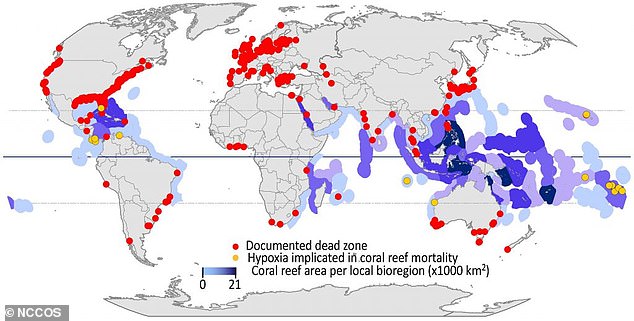 Separate surveys show hundreds of «dead zones» around the world today where life cannot survive for the same reason that led to the Devonian extinction, and experts say it is «happening much faster than it was during the Late Devonian Period.»

«It is likely that the initial radiation of forests significantly changed terrestrial weathering patterns and released massive amounts of nutrients that were washed from the continents into the ocean,» the study says.

Late Devonian was plagued by intense monsoons causing the growth of new forests around the world.

With plants like these sprouting in a burial, the soil became rich in new nutrients that seep into the oceans in waves and gave birth to huge blooms of plankton that absorbed all the oxygen.

However, the team warns that a similar process is occurring nowadays and appears to be occurring at a much faster rate than about 360 million years ago.

When were the events of the «Big Five» Earth extinguishing?

Traditionally, scientists have referred to the «Big Five» mass extinctions, including perhaps the most famous mass extinction caused by a meteorite collision that brought about the end of the dinosaurs 66 million years ago.

But other major mass extinctions have been the result of phenomena that originated entirely on Earth, and although they are less known, we may learn something from exploring them that could shed light on our current environmental crises.